The CDC Calculates the Prevalence of Autism

In the United States, the Centers for Disease Control conduct a study every two years to establish the prevalence of autism in children. I have criticized the methodology in other venues, especially because the media leaps on the subject with vigor.

This is the latest researched report, and is the source of the false fact that one in 68 children in America are autistic.

The study suggests, as it has for several iterations, that autism is a condition found in white boys attending school along the East Coast. 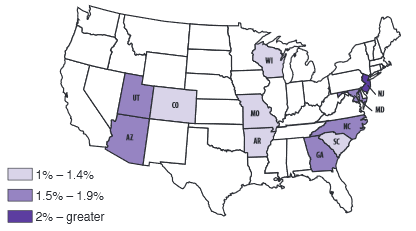 Notice that the four most populous states

, California, Texas, Florida, and New York, are not included in the study. The study excludes states with significant metropolitan populations, as well as states with significant Hispanic populations. The sample cannot be termed at all adequate for reaching conclusions about the United States as a whole. The authors recognize this but it is ignored by the media and by autism advocates.

The CDC notes that the data from the two documents cannot be compared. The survey consists of self-reported data

, using a new set of questions from prior surveys. It found that the prevalence of autism for 2014 was 2.24 percent of the entire population ages three to 17. It also found that the number of developmental disabilities dropped about 26 percent in the two years since the last survey.

The conclusion to be drawn from the 2014 survey is that the “label”, or diagnosis, for the child is changeable for parents. Requiring one “label” mandates the parent choose between a number of diagnoses and does not produce data reflecting co-morbid conditions that often are found along with autism.

What is the prevalence of autism in the United States? No one knows. Is that number growing? No one knows. If your focus is on the prevention of autism or curing autism, those statements provide little comfort.

One final takeaway from this discussion should be that the variances point to differences in medical diagnosis, treatment for co-morbid conditions, and education accommodations, that have long concerned both families and those with autism.